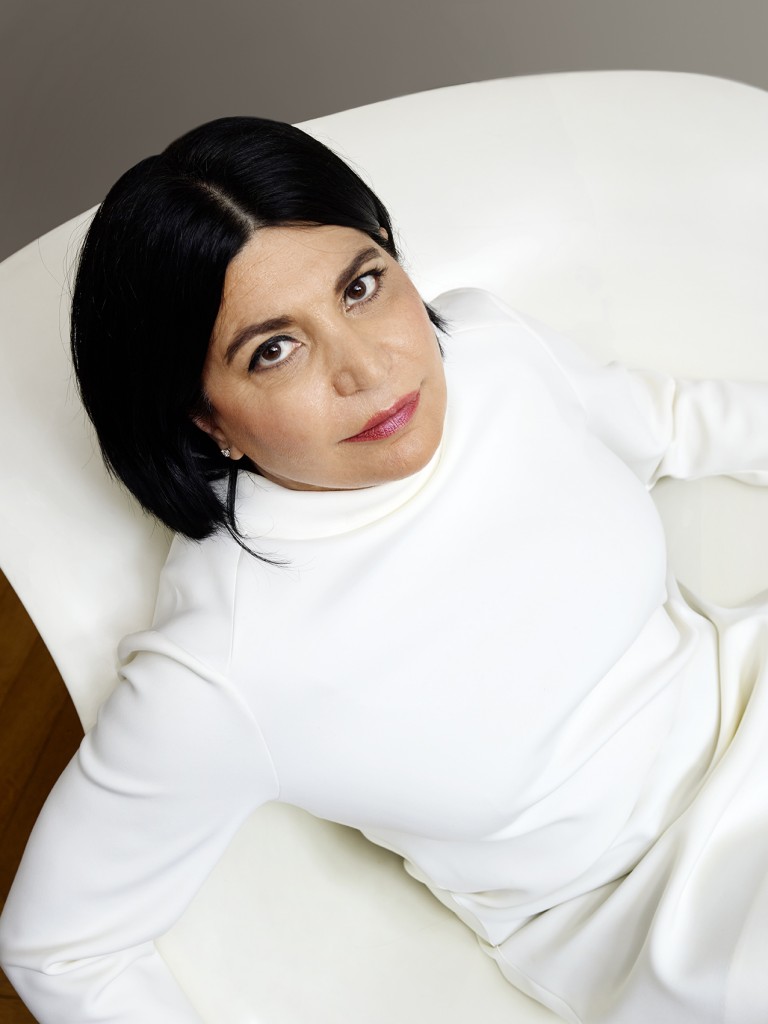 Private Choice 3rd Edition will be held from 19 to 25 October 2015 in an exceptional apartment on avenue Franklin D. Roosevelt. Personal initiative integrated into the FIAC official program, Private Choice presents a sound selection of works of art and design and also fashion designers accompanied with a fine blend of delicious food. Each work presented is for sale. This is an ephemeral collection both sharp and independent whose selection is due to the experience of Nadia Candet, curator in contemporary art who received the title of Chevalier de l’Ordre National du Mérite in 2014 (Knight of the National Order of Merit). diptyque has been an official partner of this event since the beginning. Nadia Candet has had Memento in this space where 65 works of artists/designers from 17 different countries chat in a hubbub.

memento: How did Private Choice come to being, which followed the book Collections Particulières  (Private Collections) that you directed, published by Flammarion in 2008?

Nadia Candet: There is a logical continuation. Collections Particulières is a book which introduces French private collections of contemporary art. France has considerable great collectors, demanding, connoisseurs, open to other cultures who are asking themselves relevant questions about art. Some of them are commissioning artists. These collections are not advertised as in many Anglo-Saxon countries where big art buyers have warehouses or private foundations which organize regular Open House days for showing their collections. The French collector often is a knowledgeable amateur who buys artworks to live with and to support art of his time. He doesn’t get any aid to keep his independency but is not a patronage either. This book was prefaced by Laurent Le Bon, director of the Musée Picasso (in Paris) and of Adrien Goetz, [art historian, professor, novelist who got an award from the French Academy, and director of Grande Galerie, Le Journal du Louvre, the official museum magazine].
Being a collector myself, I had the desire to take care of hanging and staging the works of art together, establishing a “wish list” of the year – this is how the idea of Private Choice naturally came to me.

memento: Private Choice makes interactive works from widely advertised artists like Damien Hirst with others who are more private, and yet you choose and hang each piece of this collection, so what is the thread or rationality?

Nadia Candet: There certainly is a thread, but you’ll have to find it. All artists and designers here were selected with complete independence. Some represented by a gallery, some not.   My sole criteria is to create stories in a historical place with works that I consider to be relevant. I like to give a thrill too. When you visit this place from the end of the 19th preserved in its original form with its gilding, the first story shows a sign “étrangers partout” (foreigners everywhere) written in neon lettering (from the artist duo Claire Fontaine), blue revolving lights in glass blown by the collective of artists NØne Futbol Club, a ceiling light in barbed wire (from Tove Adman) and old oriental carpets from my family that I also gave to NØne Futbol Club to be cut in pieces. It’s a real work of stage setting. I do give great importance to the possible links between the works, every hanging of Private Choice is contextual. With my team, I have an initial 3D digital mock-up made and I can tell where each work will go, 90 per cent. There is a respect of the work, a politeness of the object and a courtesy to what they mean. I can happen to be in between two works of art that answer one another and apologize to interfere in their dialogue! What I like is these dynamics of meanings and the dialogue which is enabled by the hanging between creations of art, of design, of fashion, food.

memento: Aren’t you afraid to connect things which do not belong to the same realm of sense, which are likely not to be at the same level?

Nadia Candet: Art, design, fashion, food, these are distinct categories which have their own reason to be. It’s not a matter of denying differences, it’s a matter of “art de vivre” (art of living) or of correspondences between selected objects. It’s necessary to rest at some point, so better to do so on a designed object. As for the food, I notice that the culinary aspect is now being paid very special attention today – it all fits together.

memento: Does this sense of art of living and this special eye of yours come from your Eastern origins?

Nadia Candet: I was born in Egypt, my roots are Armenian and my maternal grandfather was an antique dealer of oriental art on quai Malaquai in Paris, the Kevorkian family. I’ve lived amid stocks of art but this anchoring is not looking backwards. My taste goes to the art of my time but it’s right that I was fantasizing France from the other side of the Mediterranean Sea where I first lived. I saw France as Loti would see the Oriental world! So this magnificent apartment which relates the France of the 19th century from my childhood dreams with the France open to the contemporary art that I know. But I like changes and always wish to offer visitors a new space for housing Private Choice for each edition.

Nadia Candet: We are in the FIAC program, that of private visits, since the first year of Private Choice. Its organizers respect our approach – they know that I have a list of major, emerging or certified artists, whom they appreciate greatly and have had excellent feedback from. There is no competition, on the contrary. But here the selection criterion is my curating thread which remains independent from FIAC. Take the exhibited artists, some have been here before, like NØne Futbol Club, designer David Pergier who conceived the mirrors, or Augustin Steyer who made framed artworks based on the montage of photos taken in this very apartment, but those are only a very few among the 65 artists/designers. Priavte Choice is also a very committed team, an artistic committee, 2 managers and over 20 partners involved.

memento: How do you come to have such a knowledge of contemporary art, that is a sort of a separate world that is continually evolving?

Nadia Candet: This is due to “la petite histoire” (an anecdote). When I was 7 years old, a tile fell on my head and fractured my skull. The nearest hospital was Bretonneau in the 18th arrondissement, a very little one where I stayed until I recovered. Years later I learned it’d closed and I wanted to visit it again, by this time it was the 1990s and the hospital had become l’Hôpital Ephémère, an artists’ residency and creative center, with visual/plastic artists as well as musicians – a place which would become a cult. Thomas Hirschhorn started here (prize winner of prix Marcel Duchamp), Ghada Amer, an Egyptian artist living in New York now has her workshops there, Tatiana Trouvé was here too (also a prize winner of prix Marcel Duchamp). This is the place where we started with my husband, we bought some art pieces and began to follow some artists and here we are now, after thirty years of life and passion for today’s art. 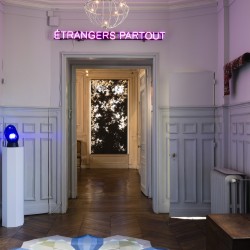 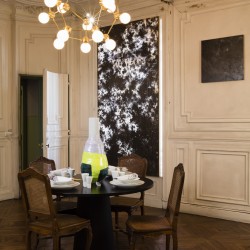 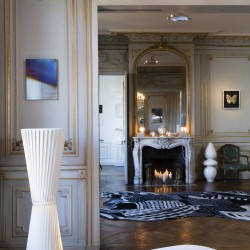 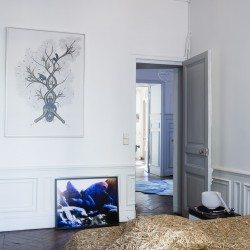