Etienne-Jules Marey was at the starting point of a different way of looking at the world. His iconographic work deconstructing animal and human functions, movement and locomotion into fixed sequences cuts up time, substituting instruments of measurement for sensory perception.

The posterity of Etienne-Jules Marey (1830-1904) is justified but bogus at the same time. Justified because of the photographic ingenuity that he introduced to his scientific experiments. Bogus because of the link that was intentionally made to the history of art and cinema as a result of the technical advances created by his work. Just as a succession of images produces a film, the sequence of facts creates a story, but it is the narrative that links them together via an essential causality that makes them inexorable  a posteriori.  This is why Marey is important in the history of photography and why he is considered to be a forefather of cinema. Although this is true, it was an accidental consequence of his inventions, especially his photographic gun and chronophotography.

Marey was a physician, a physiologist and held a chair in Natural History at the Collège de France. His scientific work was prolific (respiration, human and animal physiological mechanics, hydro & aerodynamics, plus other fields of endeavour). All these fields of investigation had one thing in common – movement and his desire to slow it down so he could understand it fully. « I am fascinated by movement as it is the most apparent sign of life. I would dearly like to understand the mechanisms underpinning some of the laws of nature. I am looking for any way I can capture the visual traces of these movements because I distrust the senses; they are too slow and too misleading. The trace remains, movement goes away. » (E.J. Marey)

As he investigated the pulse, smoke machines, legs, wings and fins, he designed (or had tools designed) that would « record the movements of the body in a graphic way » (E.J.Marey). To this end he invented photographic tools, devices and photographic protocols. The end result was the extraction of quantified and timed data from stylised visual lines and curves. This record of reality observed visually meant that he could establish models of physiological functionality relating to general movement (walking, flying and swimming) – the primary goal of his « graphic photographic method ». But he often left the analysis to others as he preferred to « trinket » (his own words) with new ideas and inventions that would capture movement.

Using a zoetrope and a chronomatograph meant that he could « slow movement that was too fast to be observed with the naked eye right down so it could be analysed. » His method allowed him to observe the “relationship between space and time which is the essence of movement” (E.J. Marey). The irony is that cinema produces movement in images whereas Marey sought to immobilise movement in its various transitional states. His photographs seem to breathe time into something static and photograph time itself. He was so successful in his endeavours that his photos are now iconographic: “nothing is more mysterious, lyrical, explosive or current than the silence of the black or the lightness of white in these photographs.” (Henri Langlois, one of the co-founders of the French film organisation, Cinamatheque Francaise).

Marey’s genius left much for future generations. The slowness of his photographs precipitated even the pictorial experiments of the early twentieth century that tried to capture the movement of the mechanical age; Futurites Giacomo Balla (Ragazza che corre sul Balcone), Umberto Boccioni, and then Marcel Duchamp and his Nude descending staircase n°2 (the artist quoting Marey). These pieces of work depicting the mechanics of movement are similar to Marey’s diagrams from chonophotographs with their lines stylising the different phases of movement. There are plenty of contemporary artists who laud Marey’s work.  Moreover, modern methods for capturing the motion of body for graphic transcription are advances stemming from Marey’s initial device with cameras, sensors and markers producing a systematic database from which synthesized and animated images are produced. Digital technology may be new, but the principle behind it is the same.

Marey was a scientist first and foremost. He refused to tweak his inventions for glory-seeking purposes or for commercial or recreational goals. But by using a machine instead of biology to sequence time via images and by favouring graphs of data over discourse, he kick-started a change that would herald the future and would not escape the nascent arts of his era. 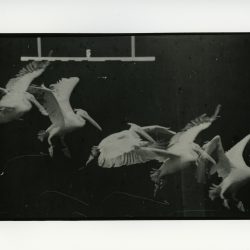 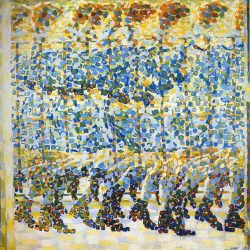