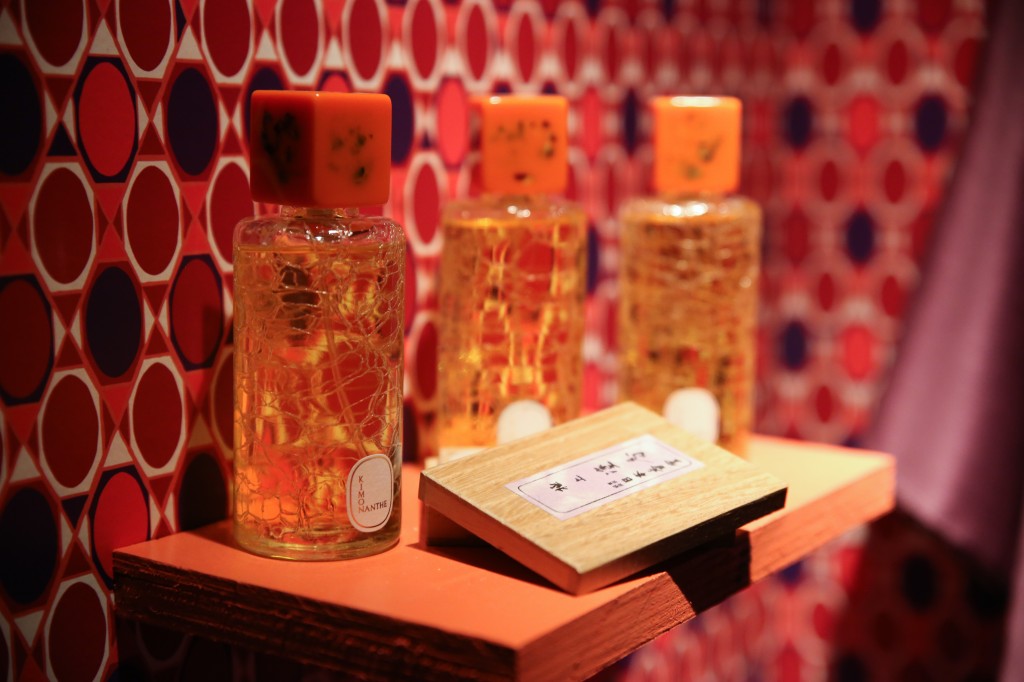 Kimonanthe joins the exclusive collection of the eau de parfum of Collection 34. As part of this refined bazaar, the fruit of collaborations with highly skilled craftsmen, this enigmatic eau de parfum in its crackle glaze bottle spritzes the wearer with a waft of oriental fragrance.

The word Kimonanthe, deliberately evokes Japan by sounding a bit like kimono; the « anthe » part nodding to osmanthus, the sweet olive tea found in Asia. These two sides designate the two parts of a story that intertwine to produce the fragrance: the white blossom of osmanthus, and zukoh, the word given in Japan to the finely hand-ground incense powder that is rubbed on the body and occasionally tossed in the air to communicate with the divine. You can sometimes catch a whiff of it from the wide sleeve of a kimono as the wearer moves around during a ceremonial event.

The tiny white blossoms of this evergreen shrub emit a highly unusual and joyful scent that is occasionally fruity and milky with a touch of animal thrown in for good measure. When combined with the zukoh, the perfume acquires a woody note, with a touch of spice, camphor and clove. The base notes of candied apricot from the osmanthus free smoky top notes from the incense. They are released in stages, go back and forth and harmonise as if on a merry-go-round of scents that are particularly sensitive to changes in the acidity levels of the skin. Whilst these evanescences delight, the perfume becomes the wearer’s own over time, so Kimonanthe remains mysterious in nature.

The golden ombre tones of Kimonanthe are contained in a glass, crackle glaze bottle. This glass surface, unique on each bottle, has been manufactured in the workshops of Waltersperger: a highly skilled House with an unequalled treasure trove of perfume bottles. This particular bottle is the very latest in semi-automatic French crystal glass industrial manufacturing processes requiring highly qualified manual intervention. The bottle stopper for Kimonanthe is an homage to the beaded glass resin necklaces that Christiane Montadre-Gautrot, one of the founders of diptyque along with friends Desmond Knox-leet and Yves Coueslant, created herself in the Sixties.

The use of olive trees from China and incense from Japan makes Kimonanthe appear native to the East. But the originality of the research behind its composition (the work of Fabrice Pellegrin) gives it a powerful olfactory character that undulates… Touching, and shifting, the eastern element of this fragrance may well be disorientating, but Kimonanthe still manages to induce a serene wakefulness.