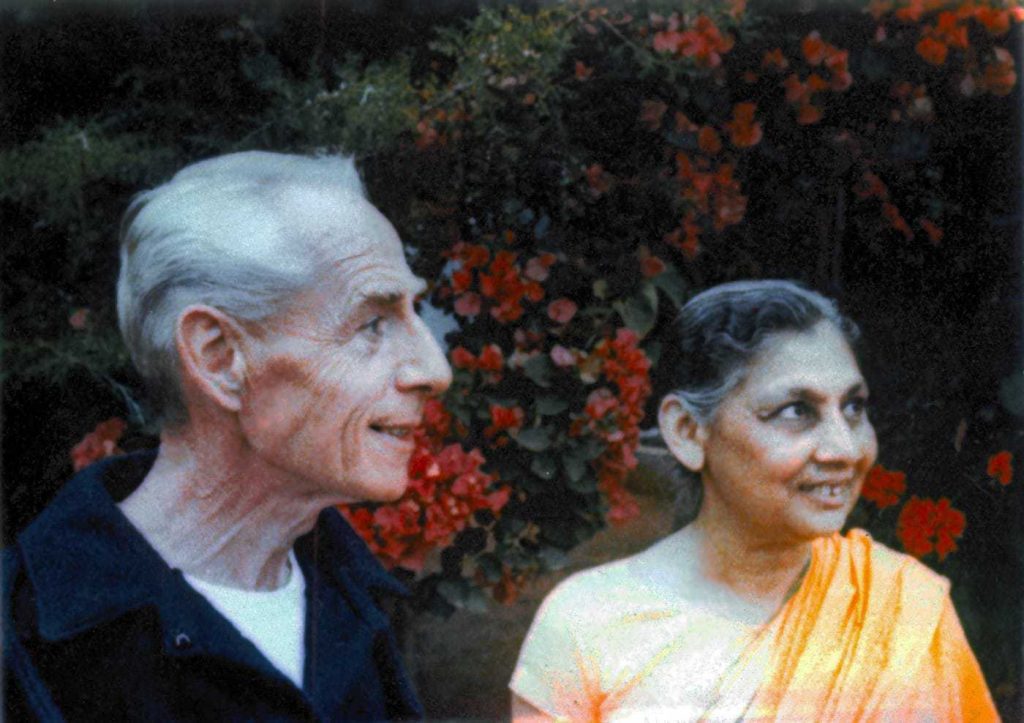 Which tales does he give us the key to, this old man with a child’s tongue? His writing is so faithful, his voice so true, but his knowledge is but a conduit for the weight of the whole universe. His tales are his journey through life that have led him to the Miraculous.

Every tale starts with « Once upon a time… », God knows where or when but it happened at one point… What Satprem says in La clef des contes is also « once upon a time », but it only happened once, there was only one moment in time for everything from the single matter of stars to each living cell, an immeasurable unity that is perpetually present in that moment. One single moment for everything and forever underlying every single once upon a time…

Who is this storyteller of a miraculous fairytale that is present, alive and deep within oneself? He was born in 1923 as Bernard Enginger in Brittany and a sailor. He changed his name to Satprem in India. He travelled across Africa, he went to Brazil, India and the Himalayas, worked as an archaeologist in Afghanistan, sold Larousse dictionaries in African villages, became a sannyasin as an initiatory choice when travelling around India. He also worked as  gold digger in Guyana, and spent time alone in a rather hostile Amazon jungle. This rebellious gold digger, and poet, inspired by Rimbaud and who later corresponded with André Gide, found an inexhaustible vein of gold deep within his soul by reminding us all as a species that we have no choice but to surrender to an all-powerful tenderness that itself will allow humanity to survive. These roads all go in one direction, and he travelled them having survived the ultimate human humiliation: having been against the German invasion at the age of 19, he was arrested by the Gestapo, interrogated and packed off to Buchenwald for a year and a half, emerging like a skeleton and suffering from typhus ; he had experienced « that which beats within a man when there is nothing left anymore. »

The dawn of his salvation was waiting for him in the heat of the Bay of Bengal in Pondicherry where he met a person called the Mother (born Blanche Rachel Mirra Alfassa) who was to accompany him in his work as sage, philosopher, poet and prophet Sri Aurobindo. She was the one who renamed him Satprem, meaning « true love ». As the years passed by, he became her close confidant and mystical clerk and they were together until she died. He would continue to write and express his experience of what it meant to be a man, an « unknown person in a second-hand coat » once the illusory mental constructions of religion, ideology and various affiliations have dispersed… as the world becomes « an aggressive, metallic crush » where  « nothing goes to the infinite, everything resonates in its own box. » « As if all Matter was made of Spendour covered with a crusty layer of painful, mortal illusion. »

The ridge on which our species is dancing today knowing its possible end, knowing that this is imminent and probably necessary to stimulate human evolution: “We are not suffering a moral crisis, we are not in a political, financial or religious crisis, we are undergoing an evolutionary crisis. Humanity is dying in order for something new to be born…” Just as in the story of evolution, fish lost their gills when they emerged from the sea and went on the land.

« Mother is a fairtale in the cells of the body. » he wrote. And it is this tale that holds the key without violating an ineffable mystery.  « The key is in matter, in the depths of life, in every single one of our cells ” wrote Satprem, because « salvation is physical. » (Mother). « There is no path to follow, you have to find it within yourself. » (La clef des contes).  « These little cells, alive and winking and smiling, have a conscience that noone knows, no sound from above from that tight, thinking and reasoning head […] And it was a musical conscience. » (ibid.) His incarnation manifested itself within him like the flow of infinite power surging through his body, massaging and sweeping away everything that did not matter. « You have to unravel the Enigma (a wounding Enigma he wrote before), heal the old wound in your body, here and now, in your first naked rock, your matter from the Beginning that contains your end – and your Purpose on Earth » breathing the « Voices of another language » of an infinite tenderness « that nevertheless blows gently like a light breeze across a fennel heath, like forgotten music that has returned. » Because the pain of the earth wrote Satprem « is not to be the joy, love and life that cover our Rock of Lies. » (ibid.)

Technological solutions offered to help the sufferings of current humanity and which are often catalogued under the term Transhumanism appeared to be (well before their emergence) « improved skeletons », that is to say nothing with connections to life, and barely artifical connections to death. Satprem bore witness to this warning by Sri Aurobindo: man is a being in transition whose evolution is incomplete. « I am the fighter for a world yet to be born, an old world that is uprooting itself and a new world that will be formed from its own flesh ».

« Mother and Sri Aurobindo forced me to survive and find the Place of the Future where there would no longer be the old “improved human being” ». The challenge is to « harness this time and once and for all, the powerful Fire, the sublime Power within the depths of the cells of the body that could change everything, this tremendous earthquake that would recreate a new Earth and emit a forever Yes from the depths of our old despair. » So here it is, the key of tales.