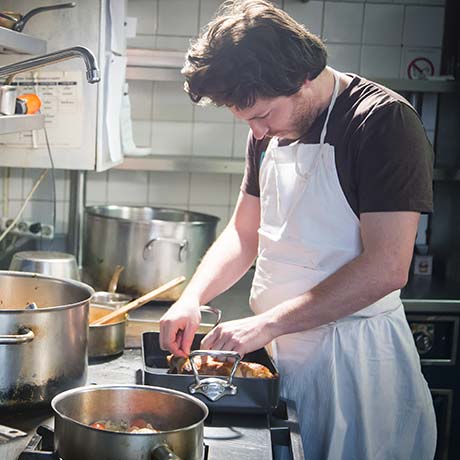 “Jean Imbert has been passionate about fine food since he was a nipper… At the tender age of 19 he was the youngest to graduate from the Institut Paul Bocuse (school of culinary arts and hospitality management). Roll on a couple of years and he opened the doors to his very first restaurant called L’Acajou. In 2012, Jean slam-dunked season three of Top Chef. His kitchen is enthusiastic, locavore (uses produce grown locally) and focused on sustainable fishing and small French agricultural producers. Jean is a big travel fanatic. In 2015, he explored markets in New Zealand, Polynesia and Iceland and organised dinners in New York, San Francisco and Sydney. In Egypt he supervised the menu aboard the Steam Ship Sudan, the very vessel that inspired Agatha Christie to write « Death on the Nile ». He chats to memento about his passion for travel and culinary discoveries…”

« The thing I love the most about travelling is all those little titbits I find out about culinary culture, ancestral know-how, produce and regional specialities!

Tetiaroa Island really knocked me for six. It’s an amazing eco-resort: in the middle of the atoll there is a huge vegetable garden with produce nourished by kitchen waste from the hotel. The resort has a rainwater recovery system, solar panels and protected and monitored flora and fauna… Every hotel employee has their own little plot in the garden for growing vegetables! It was amazing to discover this pristine little island free from modern pollutants where people practise sustainable fishing and where bees thrive and produce mouth-watering honey as they go about their business pollinating the vegetable patch!
I met Marlon Brando’s son there. He still lives on the island and does a bit of fly fishing in the lagoon! But the thing that pulled at my heart strings the most was just how intensely clean and pure the island was. Practically untouched by the hand of man, this is the kingdom of birds – and each bird is more beautiful than the next. Even humpback whales come here to breed in the waters off the lagoon!
I will always remember a lip-smacking parrotfish Carpaccio. The fish had been caught in the open sea and was served with wild cucumber and melon grown on the island.

In Kyoto I was impressed by the ancestral know-how of Japanese chefs: not just the art of making sushi but also of preparing a kaseiki multi-course meal: Japanese fine dining at its best. I was equally impressed by the whole cultural ritual surrounding such meals.
In the old town I visited patisseries that were over 200 years old and which were still run by the same family, handed down from generation to generation. I even saw geishas in the street. It was as if time had stood still. Traipsing round the markets we stumbled upon old knife shops run by shopkeepers that looked just as old as the goods! It’s a weird feeling being in a place untouched by the passing of time – stuck in a time warp!

In Cuzco I discovered Inca culture. They were the first people to farm potatoes and in tough terrain to boot – sometimes at an altitude of over 4,000 metres! How on earth did these people build cities so high up the mountain sides and manage to farm on terraces and create such mindboggling irrigation systems?
I followed the Inca trail to Machu Picchu…Such a stunning landscape. It was amazing to see tea farms half way up virgin mountain slopes; the air teeming with hummingbirds.
I remember with great fondness the local Ceviche (fresh fish appetizer marinated in citrus juices) and the different marinades that went with it… »