James Turrell - The light inside.

James Turrell is a living American artist. His raw material is light. This light is inseparable from the empty space it floods. His art is therefore a work of immateriality that is experienced more than gazed at and whose ultimate material resides in the perception of the spectator.

Having graduated in maths and psychology of perception before completing a university degree in art, James Turrell presented his first light projections in 1969. This experimental research on light – in the sense that it involved an audience that had experience of his work on luminous spacialisation – constitutes the nub of his work, often referred to by the phrase « perceptual environment. »

If light is almost always associated with intelligibility, the clarity of ideas and representations and an understanding of a geographical space, James Turrell takes light back to being a sensorial experience so that shadows, mystery and invitation to spatial and cosmic meditation are revealed, rather than demonstrate geometric thought with defined angles and edges.

Turrell produced a considerable body of work. Much of his work has already been collected by the biggest museums and private collections. Unless the artist expresses dissatisfaction with this approach, it seems possible to distinguish two facets to his work: the first regroups those  focusing on artificial light, the second those that stage natural light from a perceptive viewpoint.
These two aspects are an architectural approach to light. With the first, the projection of light builds the architecture of the piece whereas the other creates architectural settings (« skyspaces ») penetrated by natural light.
Artworks relating to articial light create their space with lines of light and walls of colour with chromatic mutations that make the mind wander off tangible markers. These pieces of work are ideal for museums, transported and rearranged depending on the place or event.

Artworks relating ton natural light are often underground and work as galleries that receive light from the sky and in which the spectator can gather his or her thoughts. This spiritual dimension of light has much more impact in these environments. The most well known artwork of this kind is at Roden Crater in Flagstaff, Arizona which he purchased and where he went on to dig a number of light observatories in collaboration with Gene Sequakaptawa, a Hopi Indian chief, so he could be inspired by the kivas of his tribe, half-buried circular rooms in which religious rites took place. Roden Crater is a lifetime’s work and still under construction. Pharaonic and in ruins, this unfinished work is still a work site and cannot be visited yet (http://rodencrater.com.). « There is no image in my work because a representation is of no interest to me. I am interested in the inner vision. The junction point between inner vision and world view is only a metaphor for spaces open to the sky – skyspaces. » James Turrell has designed skyspaces around the world as well as in certain museums. Silent and bare, they open up an inner space of cosmic perception. The skypace is an expression of « land art. »

A skilled aviator and aerial cartographer in his youth, this artist is engrossed by science and technology including the neurobiological approach to perception, a religious man affiliated to the Friends’ Society (Quakers), an American citizen with Irish origins, a place he lives for some of the year – all of this plays a part in the work of James Turrell, in which light becomes an invitation to delve into a deep consciousness where a certain piety towards the Cosmos shines bright. 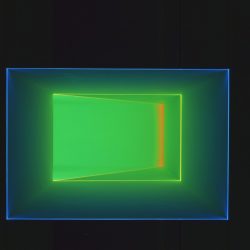 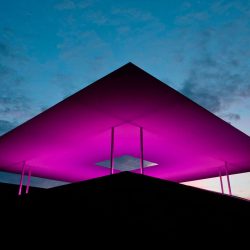 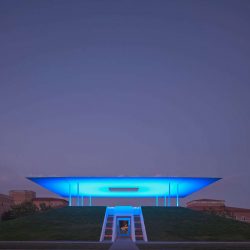 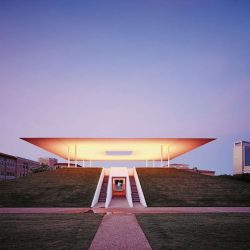