Leslie David’s drawings for Rose Delight  inspired by toile de Jouy motifs with a new oriental twist take memento on a journey that dizzies the compass: one of Indian cottons, a time of the Indies, then Marseilles, Alsace and Switzerland…

The word indiennes refers to cotton fabric, usually thin and lightweight with bright cheerful prints. These cotton fabrics were imported into France from India during the sixteenth century, over a hundred years before France established its trading posts there. In contrast to the current fabrics available in the land in wool, linen and silk for the most refined, their patterns and colour, delicacy and the fact that they were easy to wash caused a buzz amongst the new and growing merchant class.

It was the Armenian community in Marseilles that, rich as a result of its ties with the Indian ocean, first imported these fabrics before trying to reproduce them, hence initiating a new local handicraft. Before long, these Indian cottons were copied, particularly by Protestant craftsmen who were both entrepreneurs and traders. Religious conflict drove them out of the land and the manufacture of these cottons took off in Alsace, which was not French at that time, as well as in Switzerland. Villages specialised in specific Indian cotton colours, for example Basel focused on indigo from the West Indies and Haguenau in madder (a plant whose roots provided the red pigment alizarin that was used during the dyeing process).

The prints, first created manually, were gradually printed mechanically on the cloth. But it was the general process of cotton fabric manufacture, the specific steps involved and the multiple washing of cloth that led to a proto-industrial segmentation of tasks, new techniques and investment of capital. This manufacturing process, that spread across Europe during the XVIIth and XVIIIth centuries was considered to be the first rumblings prior to the great British textile revolution that took off in the Manchester area in the late XVIIIth century. Before Manchester, the European capital for cotton was Mulhouse in Alsace.

Indian cottons also kick-started a consumer craze. And they were so successful, so fast, and enjoyed such spectacular popularity that their arrival was detrimental to the traditional textile sector, initially the Lyonnaise silk industry and then drapery from Normandy and exacerbated a trade war in the middle of the XVIIth century. France and England banned textile imports respectively. France launched the East India Company and one of the latter’s missions was to control the importation of Indian fabrics, which continued nevertheless, despite local imitations.
In 1686, Louis XIV’s minister Louvois banned imports of Indian cottons and any manufacture of fabrics that looked like them and that continued until 1759! But it was to no effect, the craze for Indian fabric became even greater even though ladies caught wearing them were sometimes stripped naked in public places.  Smuggling, manufacturing centres close to the country’s borders, the commercial status of free zones, all of these factors were advantageous for the production of Indian cottons, that kept going to appease a popular fashion trend that failed to dwindle, fanned as it was by its prohibition. Cottons that were printed or painted in vibrant colours even came to symbolise opposition to royal power.
In 1760, Christophe-Philippe Oberkampf and Antoine de Tavannes created the Oberkampf factory at Jouy-en-Josas where they made the famous toiles de Jouy, which are still being reproduced to this day.

And it wouldn’t be long before the New World cotton plantations would appear on the scene, creating new rivalries and the odious African slave trade. But before this new global geography of cotton manufacture, the arrival of Indian cottons in Europe foreshadowed a modern economic pattern, both with regard to its consumption, the fashion trend that bolstered it and the international dimension of its diffusion. 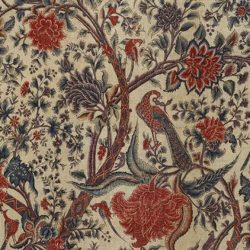 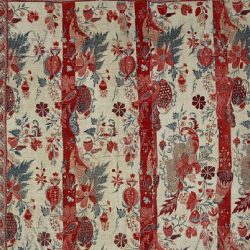