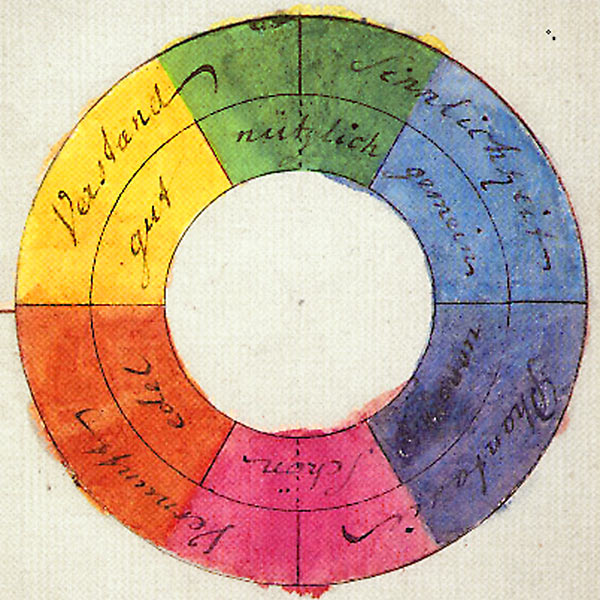 The Theory of Colours by German poet Johann Wolfgang Goethe (1749-1832) invites the reader to consider a slip-up in the perception of colour at the time. His concern was less with the analytical treatment of colour but rather the phenomenon of human colour perception and the qualities thereof.

How amazing that a poet should want to dip his toes in the world of science. In this case, the great Goethe would not just dip, he would plunge! He disputed the findings of a giant amongst geniuses, Isaac Newton (1642-1727). A battle that was lost before it began, as equations and lab experiments are indifferent to words accurately outlining sensorial legitimacy.
Written between 1790 and 1823, this 2,000 page Theory of Colours comes head to head with Newton’s Opticks (or a Treatise of the Reflexions, Refractions, Inflexions and Colours of Light) published in 1704. The latter outlined a crucial experiment: Newton passed a beam of white light through two prisms that were held at such an angle that it split into a spectrum when passing through the first prism and was recomposed, back into white light, by the second prism, proving (he believed) that the colour spectrum is not caused by glass corrupting the light. He concluded that light is composed of coloured particles that combine to appear white.
The great man of letters had a different point of view. He believed that the colour spectrum, a compound phenomenon, was within the prism itself. His theory, based on the interaction of light and shadow, proposed that colour interacted with light. Darkness is not an absence of light but is polar to it. The spectrum can be explained by the phenomenon of colour arising from the interaction of light and dark edges. With contrasting boundaries the intensity of coloured edges increased and the eye would perceive the passage from one colour to the other, with the appearance of one resulting from the presence of two others. Goethe regarded the interplay of colours within the spectrum as being perceived in totality. He therefore went on to attribute allegorical and mystical values to each colour, and moral values depending on their proximity to light. Therefore yellow, which is close to light, was described as « knowledge, clarity, strength, warmth, proximity, momentum » and blue, which is close to darkness, was associated with « starkness, shadows, obscurity, weakness, distance, attraction »; « prestigious and noble », yellow evoked a « warm and pleasant feeling », whereas blue was more negative « giving off a feeling of coldness » and was associated with anxiety, weakness and nostalgia.

Scientists in their labs with their measuring instruments had a good old titter about this. They would echo the dismissive words uttered by Paul Claudel about the German poet, whom he described as « a great solemn donkey» in his book ‘Saint Genevieve’ (1923), and again in his 1932 journal: « Goethe never smiles; he is devoid of any kind of humour, wit or fantasy. He is an donkey» (Paul Claudel in 1932). This cannot be even conceivable. Schopenhauer comes bounding up to his rescue: « Goethe had that faithful, objective gaze that plunged right into the nature of things; Newton was just a mathematician, obsessed with measurements and calculations, basing his findings on a disjointed theory about a phenomenon that was only superficially understood. That’s the truth of the matter. So smirk away at your leisure. » The universal poet with an immeasurable knowledge bank devoted twenty years to the study of colours. Viewed from an inner perspective. Starting off with the primitive phenomenon involved in perceiving them. Great aesthetic productivity resulted from these obsolete theories, beginning with the great precursor of Impressionism, J.M. William Turner (1775-1851) who studied the poet’s Theory and referred to it when creating his art.

Newton and Goethe did not study the same thing. What the eye sees is understood. But what the mind perceives must be examined twice: the dynamics of opposing colours in Goethe’s Theory (blue versus yellow, red versus green, white versus black) describes a cerebral reality that influences our feelings and actions. This echoes to the gap that can sometimes exist between actual experience and some statistical expertise that infers the opposite.