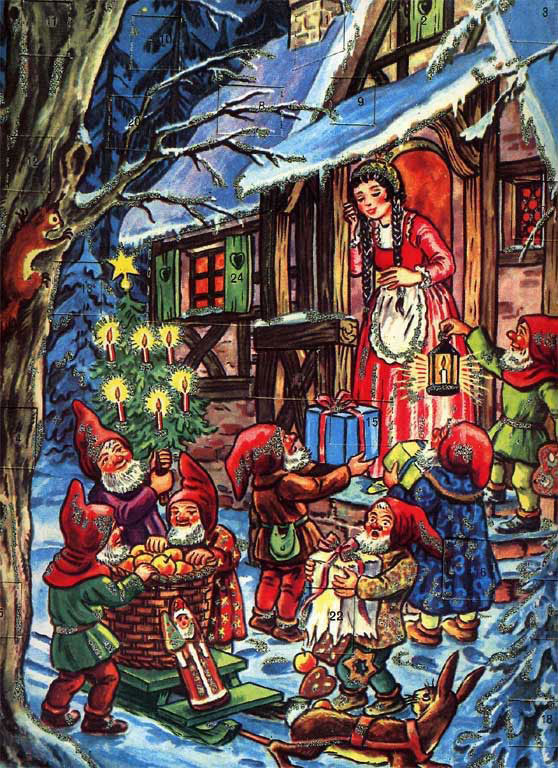 Time flies so they say. Well not necessarily. If you’re waiting for something special, time seems to pass by at snail’s pace. Every second of every minute… dragging on and on. So how long four weeks must seem to a child! This is just what the Advent calendar was invented for: help them wait…

Advent is a period in the Christian liturgical calendar. It begins on the fourth Sunday before Christmas and ends with Christmas itself. Christmas day is the symbolic birthday of Jesus of Nazareth and Advent is traditionally the period of joyous solemnity that prepares believers to celebrate this sacred birthday. The word « advent » comes from the Latin « adventus » which means ‘arrival’. It is a time to celebrate the three comings of Christ, in the past with his birth, in the present via his reception in the hearts of devotees and in the future with the Second Coming. We note that waiting for the coming of Christ is common to three great religions mentioned in the Bible. It is thought that the Catholic Advent dates back to the VIIIth or IXth century. For the agnostic or secular period in Christian countries, Advent has often been extended to the 24 days before Christmas.

The Advent calendar is a German invention dating back to the nineteenth century. There was a Protestant custom that involved sticking a holy picture on the wall every day in December along with a quote from the Gospels. Before long this custom had turned into a calendar for kids, with a new image to be discovered every day. The first commercial Advent calendar with little doors and windows to be opened every day to reveal the image behind them appeared in 1920. But the calendar people seem to remember the most is the post war calendar. Miracle of miracles, chocolate was substituted for the sad saint’s face with its virtuous quote that seemed so solemn a delight compared to the spontaneous and upbeat joy of children discovering chocolate!
Christmas celebrations these days are universally child-orientated and even the Advent calendar has become an extra in these endeavours, with or without any religious content. It is part and parcel of making the month of December a period that is different to the usual passage of time, a cyclical time that comes back year after year and which ends with great joy and presents falling like manna from heaven.  So what could be better than this path to Advent being paved in chocolate?

If chocolate meant the end of the martyrs, then the damage was done. All that remains is to beg the question: how could we shorten the wait for those who love diptyque so much that we could, if it were allowed, call them our faithful? Our answer is a diptyque Advent calendar with every day in December until Christmas day proffering a candle, eau de toilette, or perfume… When it comes to images, Christmas gifts never need to be more than a suggestion. Another calendar published on Instagram will show an image every day with little gift ideas scattered within the picture.