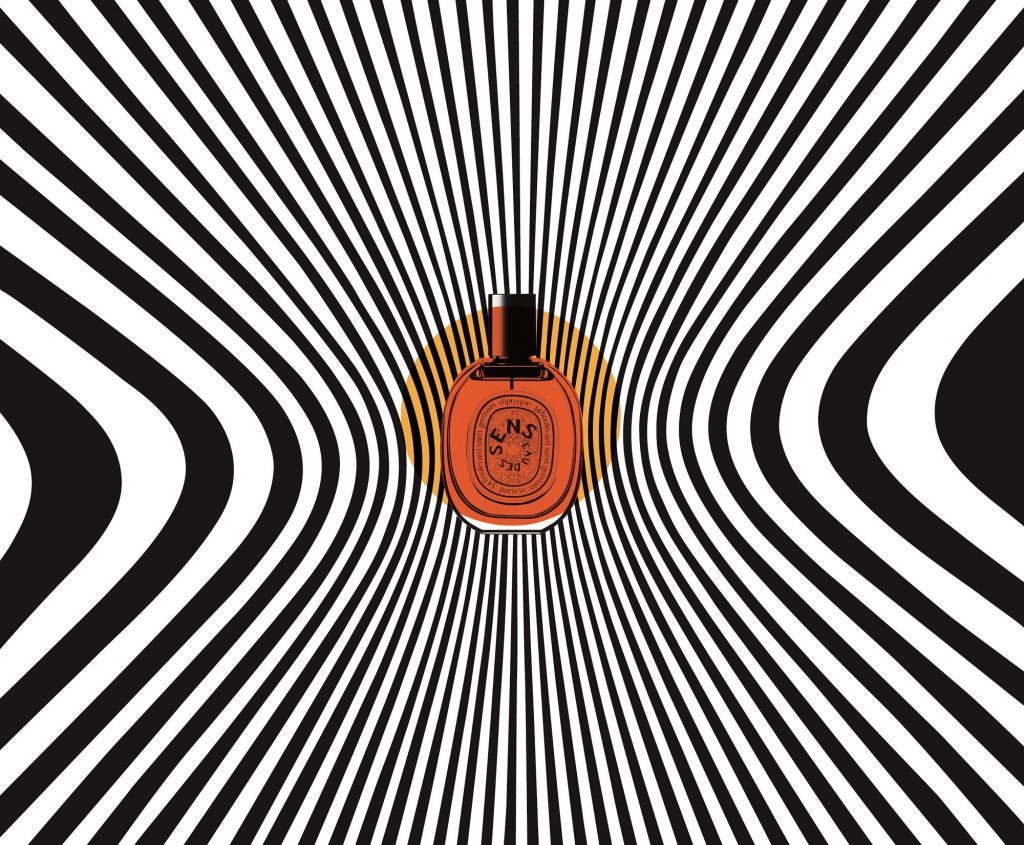 Eau des Sens is an eau de toilette by concentration and a perfume by composition. The name is a play on words – senses and essences – that heralds its polysemous nature as its olfactory accord involves a combination of senses. The notes of Eau des Sens and its words nod to a lineage that goes right back to the origins of diptyque.

Eau des Sens is revolutionary in the basic sense of the word in that it signifies a return to origins. In the history of diptyque the diptyque’s eaux, creative ideas have been ingredient-led. This new perfume goes back to the first eau de toilette along a symmetrical path: using bitter orange to achieve the aim of stimulating all of the senses.
The bitter orange fruit of this tree lives in the collective olfactory unconscious, it is connected to childhood, it provides an intense taste sensation, it is sweet and sour therefore not gender-specific which means as a House perfume it appeals to everybody.
This desire for completeness relates to the munificence of the essences of the bitter orange tree, all the elements of which give structure to Eau des Sens: bitter orange oil extracted from the zest of the ripe fruit being the volatile element. The essence of petit-grain, oil extracted from the twigs of the tree, adds a green note whereas the essence of neroli, obtained by distilling the orange blossom, adds an absolute floral note. Here you have the whole cycle of the tree, from hard to soft and sensual and bitter to sweet culminating in this roundness of scent. Plus the silvery shock of juniper berry, an olfactive oddity (or olfactory accident) that adds a punch of flavour to the mix. The unexpected addition of patchouli plumps up this orb of a fragrance whereas Angelica grain perfects its roundness with a touch of sweetness.

Here, Eau des Sens evokes and appeals to the history of diptyque : via the plurivocal sound in the language of birds that works in Eau, Ombre dans L’Eau and Eau Trois… all the eaux de toilette, each conceived to be a mysterious sphere that the passing of time itself cannot reveal. Finally, its composition: this fragmented fullness of complementary facets of fragrance and the profusion of stimuli it generates is consistent with the sensory illusions of Op Art from the early Sixties when diptique was launched.

So everything makes complete sense, from initial concept, raw materials, early years and the first time a fragrance succeeds in reinventing itself. And although the difference between revivification and an avatar is slim, it is crucial nevertheless. It is precisely because our senses work in unison that olfactory perception is rejigged when texture is altered. Eau des Sens is transformed into an insanely appealing shower gel and fragrant hair mist featuring citrus notes infused with nourishing camellia oil.