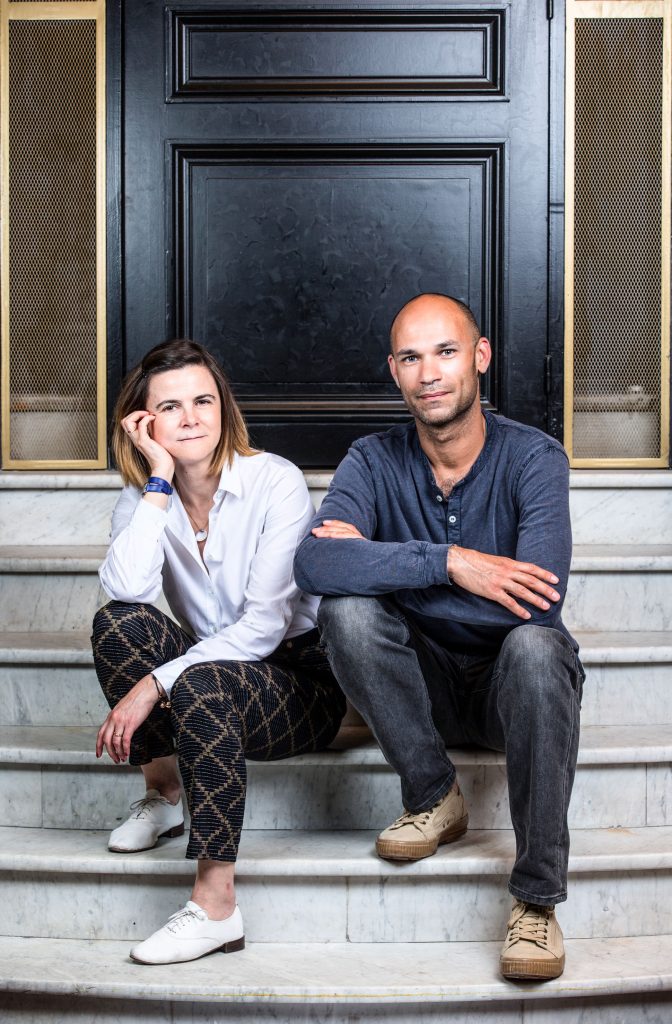 Philippe Baudelocque creates wall frescoes on a grand scale. He uses chalk as the medium for his art. Sometimes based on preparatory sketches, his art tends to unfold on walls without improvisation in a flurry of patterns that are repeated and diffracted within the framework of the main, oversized subject matter, usually an imaginary creature, but also abstract affabulations or symbolic morphograms. The artist draws his inspiration from the history of iconography (parietal rock art and the first human artworks) to scientific imagery as well as the so-called hard sciences such s quantum physics, mathematics and the laws of nature, which are combined with touch of childlike fantasy when he sketches his chalk drawings. He first became well known as a result of his graffiti of imaginary creatures on crumbling city walls. Many of his frescoes are, of course, temporary in nature; the idea is that they should be animated rather than permanent.

He created the illustrations for three Christmas candles for diptyque featuring a unicorn, dragon and a phoenix, their respective animals in the zodiac. As these creatures are also constellations, Philippe Baudelocque has also included an astral fresco, sections of which will pop up in Instagram posts over a five week period with the whole picture revealed at the end.

2. Which period of human history – “a distant land” as Racine would say – would you like to visit as an invisible tourist?
The birth of humankind.

4. What’s your favorite smell?
I love the smell of Magnolia Grandiflora in full bloom, that’s one of my favorite trees.

6. If you were a musical instrument, which would it be?
A drum set.

7. Which animal do you find the most endearing?
The sloth.

8. Synesthesia: do you have sensory associations between shapes, colors, sounds and smells?
No, because for me synesthesia is more about vibrations and therefore indescribable.

11. To be absolutely yourself, is it necessary to completely forget yourself?
For me, what works is to focus on what I feel and to express it in every way possible.

12. What do you think about?
Those who live on the Pleiades (the Seven Sisters).

13. Which activity keeps your mind so occupied that you no longer think?
Drawing

14. The novel that opened the world for you like a book, that gave you new depth?
The Enchantress, by Han Suyin.

15. The music that brings to mind Paradise Lost?
Song of the Seas by Vangelis.

17. What painting best depicts smells – in your opinion?
“A Summer Night on the Road”, by François Cachoud, in 1921.

20. Which characters, past or present, real or fictional, inspire you?
Stellar ones.

21. What question would you like us to ask you? And would you please share the answer to it?
Where are you from? Not here.