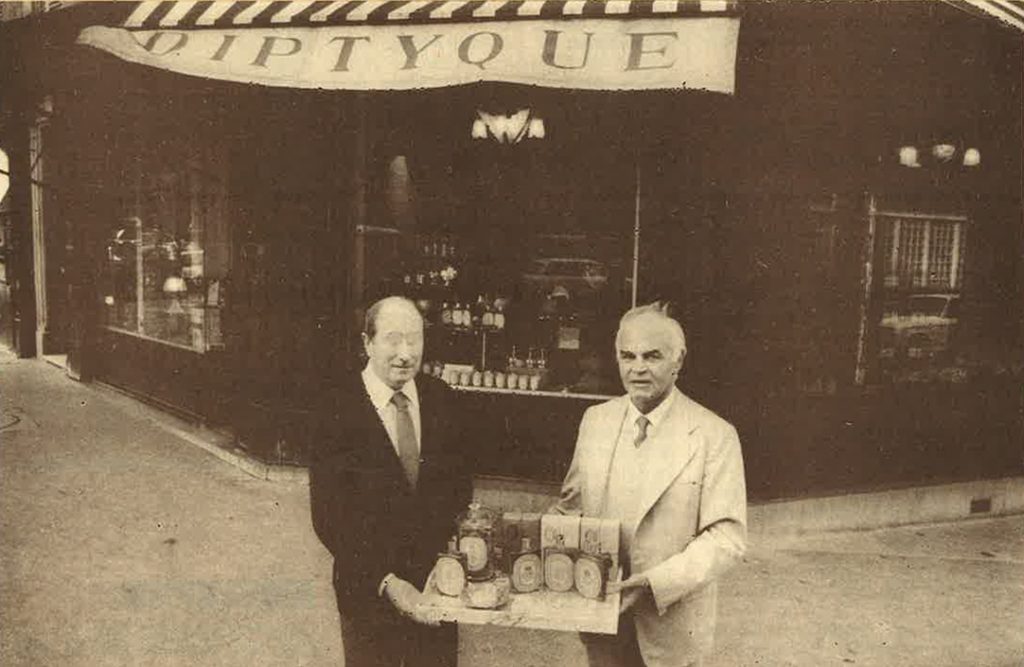 The Sixties are twice as important for diptyque, which came to life twice during that time. The House was founded in 1961 when it opened a small shop selling rare artisanal items picked up during the owners’ travels or made by them by hand. And then came the creation of l’Eau in 1968 which led to the House’s vocation in perfumery.

It is hard to imagine the rapture, the exuberant aesthetic that emanated from the diptyque shop from the get-go but the gleaming eyes of those that went there said more than words ever could. The shop at 34 boulevard Saint-Germain was nestled in the popular district of Maubert with its quiet and industrious artisan workshops, cosmopolitan and inexpensive air and closeness to the buzz of Saint-Germain, the fashionable haunt of night owls back in the day.
With sacred music, rock music and ballet music playing in the background you could peruse a thousand objects from around the world, all hand made, ancient and modern alike, toys that could bend, rare plates, hats for Lords and Hindu masks, kites and wooden birds, Pre-Raphaelite engravings, fabrics… a precious mishmash of things that was constantly being renewed because nothing came from factories, and an eye was kept on quantity. Once the shop even sold haute couture dresses from the Thirties made by Jeanne Lanvin and Paul Poiret!
Perfumes were not left out of this jumble of joy, you could find incense, bottles of great English fragrances (unknown in Paris) and homemade sachets of potpourri…
Because the three friends who founded diptyque, Desmond Knox-Leet, Yves Coueslant and Christiane Montadre, combined the artisanal finds gleaned from their travels with their own creations. They started off with fabrics: keen on the graphic arts they designed their own patterns which were made and printed by artisans of their choosing. Then came perfumes, initially by making potpourri using a dear friend’s ancient recipe. By 1963, diptyque had created its first candles which were made by Desmond at the back of the shop. The evanescent path of perfumery was becoming clearer and clearer for all to see.

L’Eau, diptyque’s first eau de toilette appeared in 1968. For this second birth in its destiny, diptyque used an English pomander recipe dating back to the Renaissance which Desmond fashioned to his taste prior to adding alcohol so it was his creation and very much of his time. This 1968 perfume was addressed to an individual, or specific person, of either gender. Perfectly of its time and ahead of its time as successive years have gradually revealed over the years.

And now diptyque is celebrating its 50th anniversary in the perfume making world. To celebrate it twice over, as it rightly should, diptyque launched two eaux de parfum: Tempo and Fleur de Peau, focused on patchouli and musk respectively, as a little nod to the Sixties. These scents truly did perfume the eddies that spawned us, this era’s children.