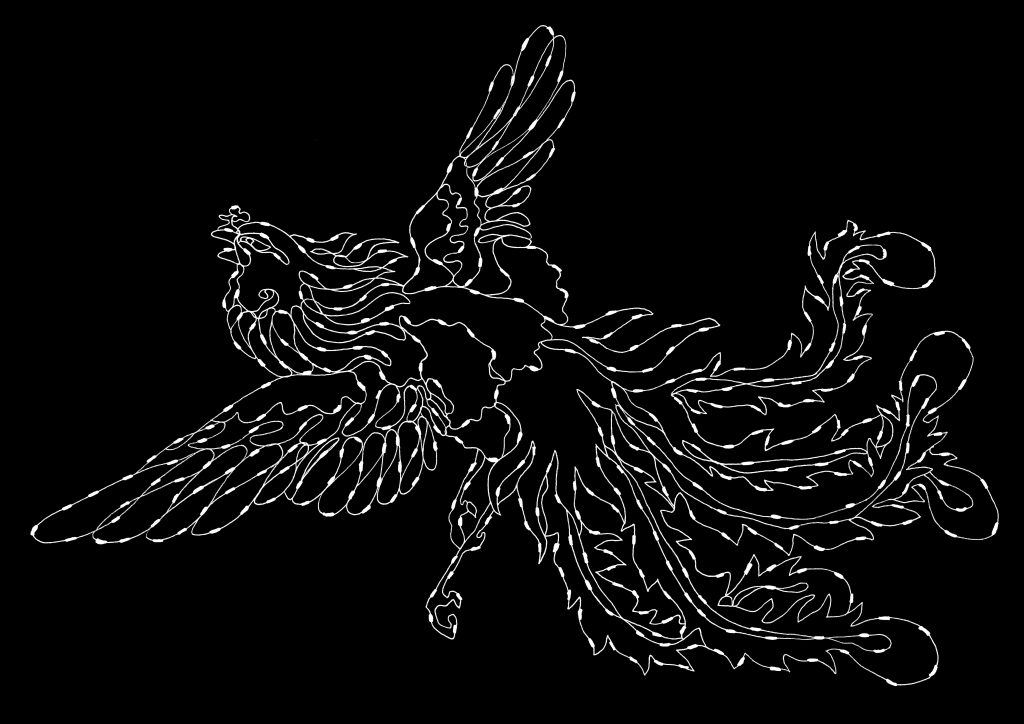 In the southern sky west of Achernar, a star of Eridanus, located below Fornax and Sculptor, with Grus to the west, Tucana to the south, and touching on the corner of Hydrus, lies the distant constellation of the Phoenix with its brightest star, the red giant, Ankaa.

To the first Arab astronomers this constellation looked like a young ostrich, Al Ri’āl, then a griffin (an imaginary creature with eagle’s head, lion’s body and horse’s ears) and finally an eagle. For the great Al Sufi, who, back in 960 mapped the constellations logged by the Greek Ptolemy in Egypt over 8 centuries before him, but who observed it from Shiraz in Persia, this constellation looked like an Arabic boat that he subsequently named: Nair al Zaurak.

This constellation took on a new lease of life in modern times: at the end of the 16th century and in the early 17th, sailors and cartographers of southern skies Pieter Dirkszoon Keyser and Frederick de Houtman rediscovered its invisible course by linking the stars together. French astronomer Nicolas Louis de Lacaille had identified the brightest among them in 1756. It was in the Uranometria by Johann Bayer (1603) that its fictitious traits earned it the name of Phoenix. Its declination coordinates lie between -39.31° and -57.84°, and right ascension coordinates lie between 23h26.5m and 02h25.0m. Phoenix is the Greek word for a mythical bird who burns himself to life, as he rises from the ashes to be reborn.(along with the Persian Simurgh, the Hebrew Khôl, the Chinese Fenghuang, the Aboriginal Minka and the Native American Thunderbird). The constellations of the Phoenix, Crane, Bird of Paradise and Toucan form the « birds of the south ».

From the northern sky, the constellation is too close to the horizon to be seen properly. It is very visible from Australia or South Africa in the summer months. Only Ankaa (phoenix in Arabic, and α Phoenicis in international nomenclature) is visible north of the 40e parallel: this red giant faces a humble future as it will become a white dwarf. The Phoenix consists of several galaxy clusters including an gigantic cluster with the same name that is around 7.3 million light years wide, smaller than El Gordo (ACT-CL J0102-4915) whose complex structure is composed of two sub clusters in the process of colliding, resulting in the spewing out of immeasurable spatial gases…

Robert’s Quartet is a group of four galaxies in the Phoenix constellation in the process of collision… Ten stars in the constellation form a planetary system, the star HE0107-5240 is possibly one of the oldest stars yet discovered, and therefore rich in scientific interest with regard to its origins and HLX-1 is an intermediate-mass black hole. Finally, the constellation is the radiant of two annual meteor showers.

As you can see, the Phoenix is not just an average-sized constellation. Astronomers say it is « poor in celestial objects ». It is, moreover, not very bright. This should not come as a surprise: who has actually seen this famous phoenix reborn from the ashes; a creature as famous as it is difficult to find? Only the redness of Ankaa gives its presence away because the Greek word for phoenix is « red blood ».