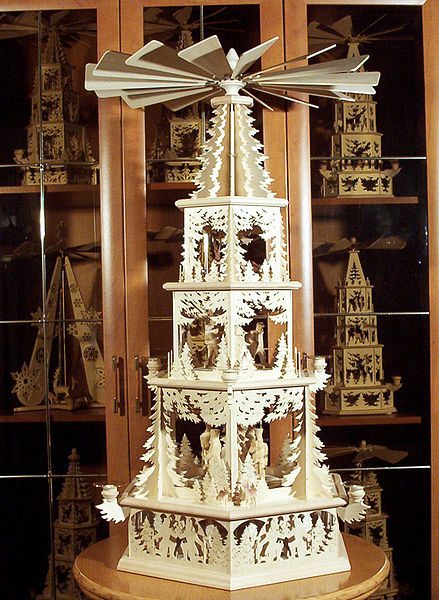 The German Christmas pyramid or « weihnachtspyramide » appeared during the XIXth century in the mountains between Saxony and Bohemia. But the origins of its symbols – light, the pyramid and the carousel element – go back eons…if not before the Biblical Flood then at least well before the Christian era.

This Christmas pyramid is very popular in Germany and in some countries in northern Europe. It consists of a small wooden carousel with several different levels. There are figurines in the middle and candles around the circumference. When the candles are lit the warm air rises and spins a propeller at the top. The principle is based on the thermal properties of hot air. As it turns the little pyramid brings the scenes depicted on each level to life. Scenes are religious and educational or feature Christmas folklore and the whole thing makes children’s eyes open wide with wonder.

Christmas is a festival celebrated almost everywhere. It has secularised the religious feast of the Nativity. But this Christian celebration is chiefly the religious appropriation of a variety of ancient pagan festivals. People used to celebrate the Winter Solstice by worshipping the Sun that was about to bring longer hours of daylight. In Rome and Egypt, it became the present equivalent of December 25th. It was probably during the IVth century AD that the birth of Christ was symbolically allotted this date. There was natural association made between Jesus and the sun as he is the new spiritual light. Flames and candles are a reminder of this light. For families celebrating Advent, an extra candle is lit every Sunday to intensify the light as the days approach Christmas and the path of the rising sun.

During the Middle Ages in Europe, there was a kind of Christmas pyramid that consisted of a small pole decorated with evergreens and colourful glass baubles topped by a burning candle. It had a conical shape, like a fir tree adorned with apples, which also existed as a Christmas decoration. As time passed by, decorative baubles and apples were placed on the fir tree itself, creating a pyramid shape of greenery, at the foot of which people put the crib scene.

The German Christmas pyramid unites these symbols; the soft round shape recalling natural cycles and spiritual rebirth. But symbols are not enough to make it revolve. This little moving Christmas pyramid would not have been possible without the invention of paraffin that made the candles burn for longer and in a safer manner. The periods are interlinked. For once science and religion have secretly come together above the cradle on this little illuminated farandole.