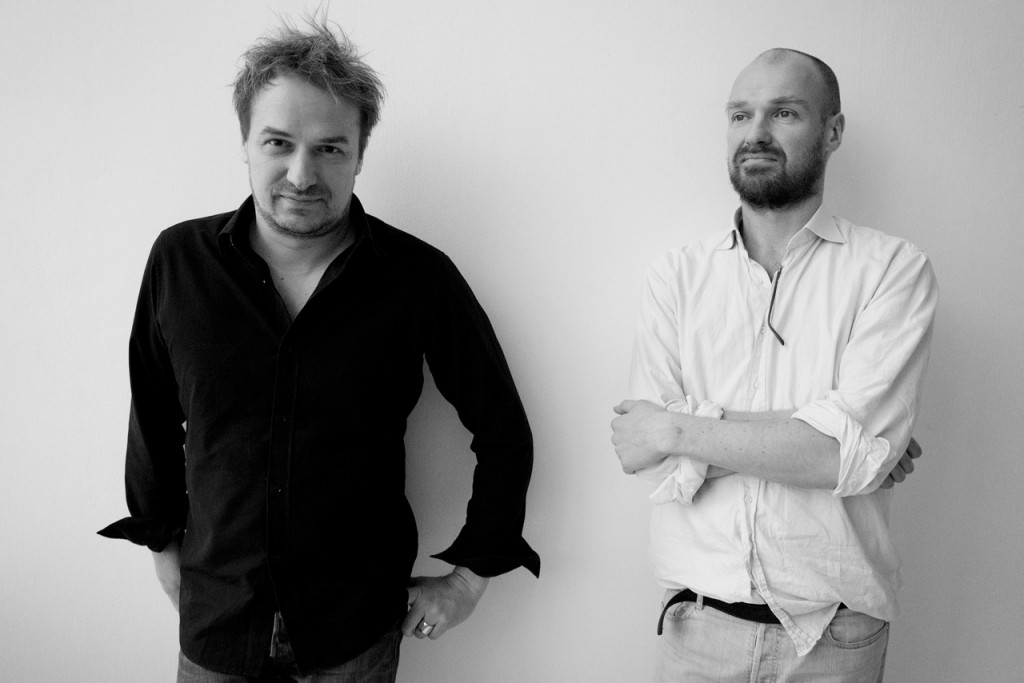 As part of the 4th Private Choice event, a private initiative linked to FIAC (art fair), Nadia Candet offered architecture studio Berger&Berger an entire room (the living room) to play with in this large, classical, residential space-come-gallery which is packed to the gills with artworks for sale. These modern artworks and design objects have been displayed in accordance with classifications of function. A space was just what Berger&Berger was looking for. Brothers and colleagues, creatives and designers, one an architect, the other an ENSAD graduate have been working on this project since 2006 and have left their creative fingerprints and signature all over it.

Berger&Berger’s raw material may well be space itself. The studio’s input is to think about space and insert inspired juxtapositions that invite lives to invest in a space – and turn preconceptions on their heads. Depending on the location, commission, expectation and requirement, the forms in which these narratives crystallise include architecture, scenography, lighting composition, design, graphics, landscape and any other relevant field to be mastered, along with relevant collaborations.
Every item or facility used be it paper, a stage, a museum etc, works, unfolds, manoeuvers and exchanges with other fields of function that come across it, creating a process of mutual dialogue and mutation. Works by Berger&Berger are multi-faceted: the newly inaugurated public spaces at the National Dance Centre in Patin; the extension to the Lambert Collection in Avignon; the extension to the Modern Art Centre at Ile de Vassiviere as well as other public commissions demonstrate the brothers’ willingness to rethink public spaces by modifying their methods. And the same goes for their work on many theatre set designs, installations, artworks and untitled pieces whether they be in material or light form, marble or electricity or HD wood, framed or unframed, in the street, on a wall, ephemeral in some places, perennial in others…
No classification is germane but all the pieces of work dialogue with each other and are interlinked either by their influences or by their peers. This is what is being undertaken in this Haussmannian cube with large windows, wooden flooring and moulding detailing – a carte blanche job given to them by Private Choice.
And it is here in this room that Laurent P. Berger has been kind enough to be interviewed by memento and introduce the artworks and objects that have been arranged in the space. The room in which Berger&Berger have invested their time seems almost empty despite being packed with intelligently silent elements.

memento: would you like to start by introducing us to the objects we can see here?

Laurent P. Berger: There is a mixture of items that we have designed as part of our dialogue with French decorators and designers from a specific era. These two Fifties armchairs are by Jacques Adnet. The design, the way the mounts have been assembled, their semi-industrial manfacturing process and the quality of the finishing shouldn’t make you forget that they were made with a public function in mind. This Marcel Gascoin table dates back to the Thirties, but like the Adnet, and the Christian Adam (blue sofa), and the Robert Mathieu (light) it was a post-war French designer who participated in the « reconstruction » period for the general public. All these items still involve artisanal craftsmanship. All the design elements you can see here involve a manufacturing tradition that appeals to the conscience of the object.

memento: what’s the relationship between these design pieces and your work?

LPB: art, design, architecture and theatre raise the same kind of questions about material, time, fiction and narrative. These questions are interlinked and depending on the context, function and destination end up generating pretty different responses.

memento: is this the theme that connects your stage design, architecture, and contemporary art pieces? Because some have a short lifespan whereas others are made to last?

LPB: There’s always the invention of space, form and the interaction between size and material. There is an experimental dimension from one piece of work to another, from fleeting pieces to those that will last, but this works both ways. All these facets fuel the production of a piece of work and that’s what’s going on in this room. Take light for example, in Jour électrique, the light from the fluorescent tubing appears as parallel bars in front of the windows: they mark an artificial constancy compared to variations of daylight, changing the perception of said constancy in the process.  This device can be seen in other works: for the staging of Mademoiselle Julie, with Juliette Binoche [play by August Strindberg, directed by Frederic Fisbach at Shizuoka Performing Arts Centre in Japan, the Odeon theatre and Barbican in London] lights were placed inside a white box [stage device]. Some objects had been placed inside the box but you could only see them when the level of brightness was appropriate – a kind of modern syntax for fluorescent tube lighting. This was also echoed in another piece of work called From the sun to the cloud, a ceiling of suspended light designed for an exhibition at MUDAM (Museum of Contemporary Art in Luxembourg).
These pieces of work using light resonate with these chromatic circles (La couleur du ciel) on the wall with their bluish tones. They were inspired by scientific work undertaken by Swiss native Horace-Benedict de Saussure in 1784. He was looking for a way of determining the blueness of the sky in the hope of reaching scientific and probably meteorological conclusions.

memento: you mean a kind of scientific impressionism using a mathematical scale?

LPB: … that connects resources and materials and raises the option of using the elements around you to obtain a result. This reminds me of a parquet floor we designed for Chateau de Vassiviere, adjacent to the Art Centre of the same name, a place that exhibits and houses artworks that question the landscape. The Art Centre is one of only three architectural productions by Aldo Rossi in France. We designed an imaginary parquet floor (real but not functional) using submerged stumps that had been pulverised then solidified. This was also a piece of work that linked materials around us to a finality of function that the material manages to surmount via its crumbly nature.

memento: what are the connections between these objects and other objects in this space?

LPB: The first connection is precisely the active presence of an exterior element that randomly impacts on a piece by either resisting it or joining forces with it. These drawings (La pesanteur du bleu de Prusse) are an example of this. They are the result of a draught in our workshop coming head to head with Prussian blue pigment. This method involves the artist taking a back seat but creating the conditions for a piece of art to be created that is different every time. The flow of air is actually creating the piece of art.
Mystère, this canvas on the wall, is the result of a digital composition of colours and pixelated particles that incorporate far more information than the printer can cope with: here the exterior element is the technical limit of the printer. These deficiencies participate in the making of the visual composition of the artwork.
And these blown glass pieces from the CIAV workshops (International Centre of Glass Art) at Meisenthal originate from an existing mould. What we have kept here are the sections that were not destined to be the final piece, they are the bits that are usually chucked away. It’s like the reverse of the object. The random shape is down to the breath of the person blowing the glass. The variations of the colour blue reveal the transformation of colour into matter. All these elements flow into each other and enlighten each other. In this case a blast of air could connect this glass to the drawings.Top of Form
Finally this variation in glass also refers to a production method in which the intervention of expertise gives an object presence, echoing the furniture designs we talked about earlier and that we chose in collaboration with our antique collector friend Julien Segard.
The second connection is the colour blue: this blue chromatic circles mirror the Christian Adam sofa, the colour of the blown glass below, the blue Prussian drawings plus the blue in Mystère, as one of the colours in the print is this colour and the other is a complementary colour.

memento: The inauguration of the architectural revamp of public places at the National Dance Centre at Pantin that you designed is taking place tomorrow. What’s your take on these pieces (which could be described as minimalist) and these large-scale public orientated works?

LPB: These fields of endeavour feed each other. We want to establish a connection between art and public spaces. There is a way of generating movement between the two via the dimension we talked about – the experimental transfer from one field to another. For example, here’s a chair that we designed for museum guards looking after the Lambert collection at Avignon. It is an object that ‘disappears’ – it has to because the artwork in the museum has to take centre stage. But at the same time it had to be part of the identity of the place. We had to use the minimum amount of material. You might think that the thinness of these pieces of wood could never support the weight of a person and would splinter the minute someone sat down. But the wood hides a metal structure and so we were able to slim all the sections of the chair down. And this chair is the result of a dialogue between metal and wood in a triangular structure that evens out the equilibrium of strength. We are lucky to have sponsors and representatives who get what we are trying to do; they understand the logic behind it and the relationship between space, function and object. This chair demonstrates the connection between design, a simple shape and a public commission.
The same goes for these five ceramic pots that all have the same shape but are progressively different sizes. These are the CNDP pots being launched tomorrow. There will be about fifty of them in all and they are distributed throughout the space. Each pot will house a different plant. These five ceramic pots are unique in that they are made from the same amount of material, so you only see the variation in thickness and fragility in the biggest pot… pretty complex to do technically, yet they will be displayed in a space that is accessible to everyone.
The scope of intervention and the objects are manifold and indistinct and yet we have a consistency of approach to the topic. This could be the story we choose to tell in a space.

memento: do you and your brother split tasks between you?

LPB: No, Cyrille and I share the same workshop, we mull over things together and work side by side.

memento: and there are still so many pieces to talk about… Thank you so much!

diptyque is an official partner of the FIAC art fair and Private Choice is officially integrated in its programme. 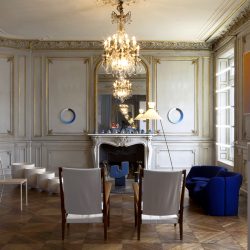 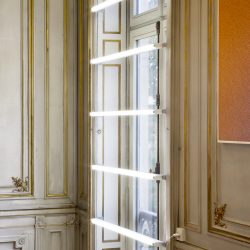 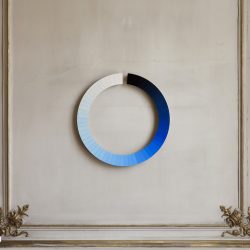 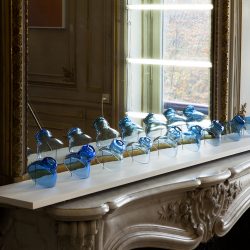 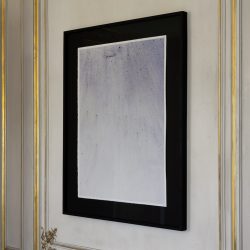 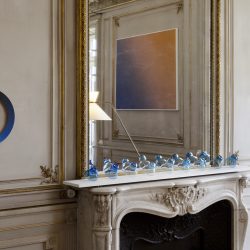 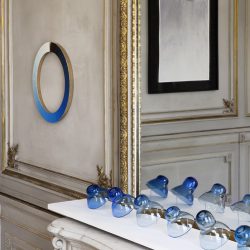 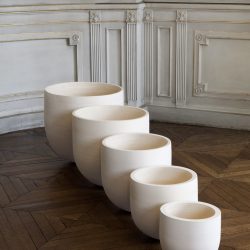 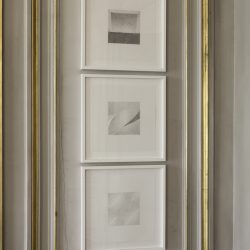 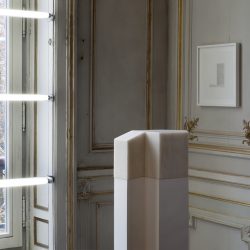 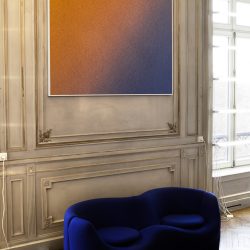