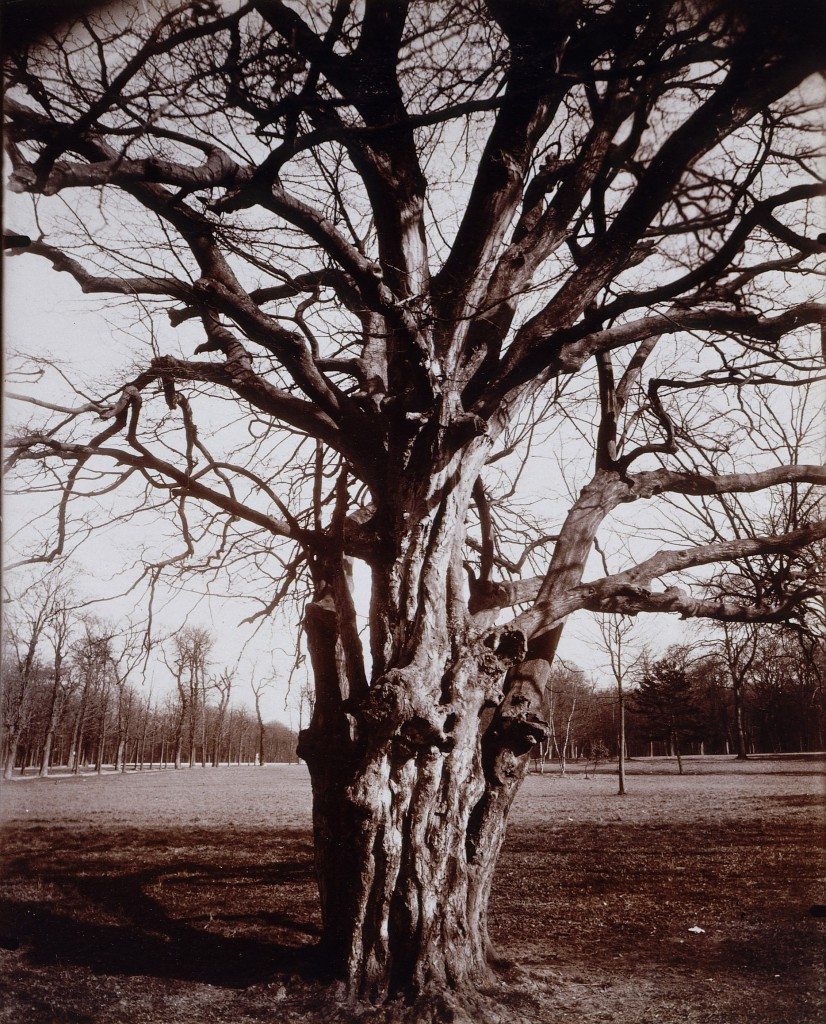 Photographer Eugène Atget (1857-1927) is famous for his pictures of old Paris – deserted streets, windows, small businesses and detailed photos of its ancient architecture. What is less known is that this artist concerned about making a methodical record of the vestiges of France before its Revolution in 1789, also explored the great historical parks around Paris in Versailles, Sceaux, and Saint-Cloud. He walked round these royal gardens for more than twenty years developing a taste for the perspectives as those once drawn by architects Le Nôtre for Versailles. There he also took close-up shots of statues or of the large vases worn with age which interspersed the spaces. It’s at Saint-Cloud in 1921 that he undertook a series named “Coins du Parc” (Corners of Park) which is about some trees neglected by the gardeners. He focused on details – the tortuous roots drawing mysterious and ornate figures, trunk bases forcefully grasping the ground cluttered with leaves. He also did close-ups of trees, like portraits, so instead of photographing them from afar to capture the spread of branches, he came so close that a vegetal network invaded the frame nearly like a menacing interlacing. The solitary tree standing like the aristocratic hotels from the Marais in Paris which Atget made a photographic list of, witnesses of a bygone age.

Among his clients, there were many artists and craftsmen whom he supplied with pictures such as “life studies” or “foregrounds” to inspire their paintings or decoration works. The well-trained eye of Surrealists detected in this repertoire of photographs, which the author claimed to be soley a documentary, the summit of modernity with which pure photography could finally get rid of the heavy references to the Beaux-Arts and finally be able to report the disturbing strangeness of the world. The strong and peculiar beauty of this photograph shown which we first see as a work of art instead of as a record, is a perfect example of this delightful alchemy of the history of taste that transformed a humble pedestrian into one of the founders of the 20th century photography.