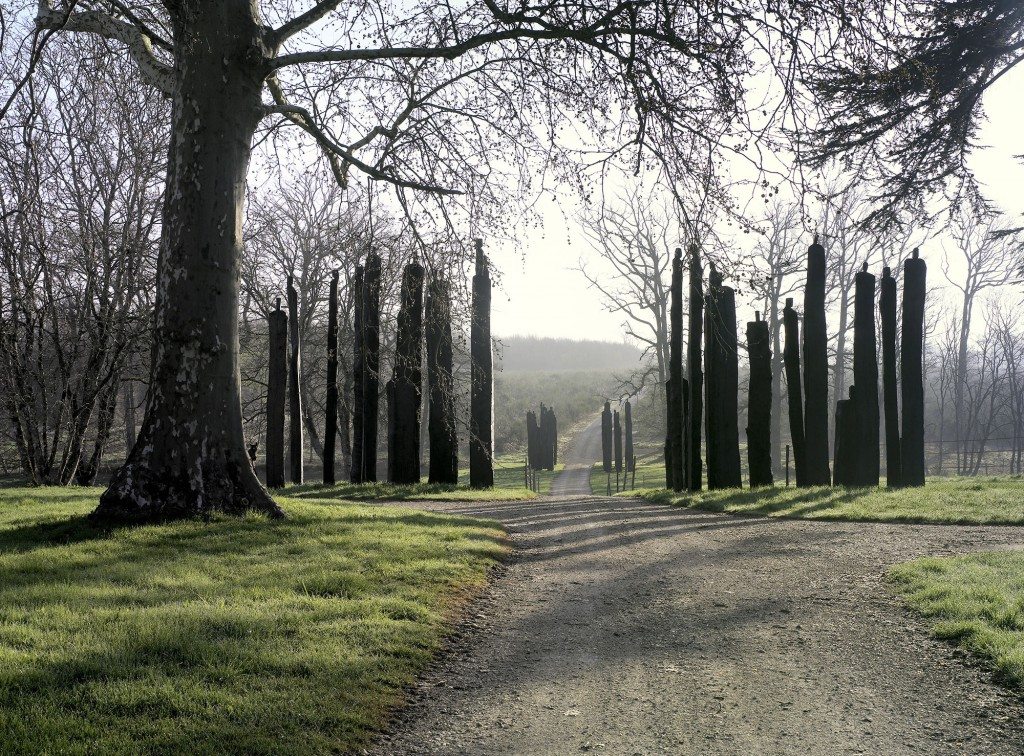 It is said that opportunity makes a thief but it could also be said at times that misfortune makes an opportunity, or an ordeal makes a deal, tragedy a framework and in this particular case, calamity triggers creativity – that’s how Elizabeth and Philippe d’Hémery turned a curse into a beauty.

In 1999, two major storms hit the north and east of France. They were not only deadly but also destroyed over a hundred million trees. The Philippe d’Hémery family woodland was severely damaged with many gigantic ancient oaks, which had been taken care of by father to son, on the ground and the distraught owner standing looking at his estate cluttered with dead giants. It was his wife, Elizabeth, who came up with the idea of asking artists to create new life out of the dead wood – to make them live again, let them be the raw material of works of art in-situ.

They got in touch with Andy Goldsworthy, a land-art artist, of a contemporary art movement that only uses natural raw materials and lets its work be exposed to the vagaries of weather, to time and erosion. He works without almost any tools his name counting, instantly responding and willing to take up the challenge resulting in a strong relationship between the artist and the d’Hémery’s. He built a sculpture – a wooden cairn – out of pieces of wood which he named Pool of Light. Other renowned artists joined in the following months. Joel Shapiro, known for the way he translates energy and movements into elementary forms, often rectangular. Antony Gromley also joined the project as did Christian Lapie, whose treatments of wood make it look as if it’d been forged, erected long disproportionate ghost-like figures. Finally Erik Samakh placed solar flutes in the park, his works marrying raw material with technology often not only to be watched but also to be listened to.

The cemetery of trees has become an area of art as death, memory and a knowledge of metamorphosis is what it takes to make art.

The story of the d’Hémery comes from the book Collections Particulières, directed by Nadia Candet and published by Flammarion in 2008.