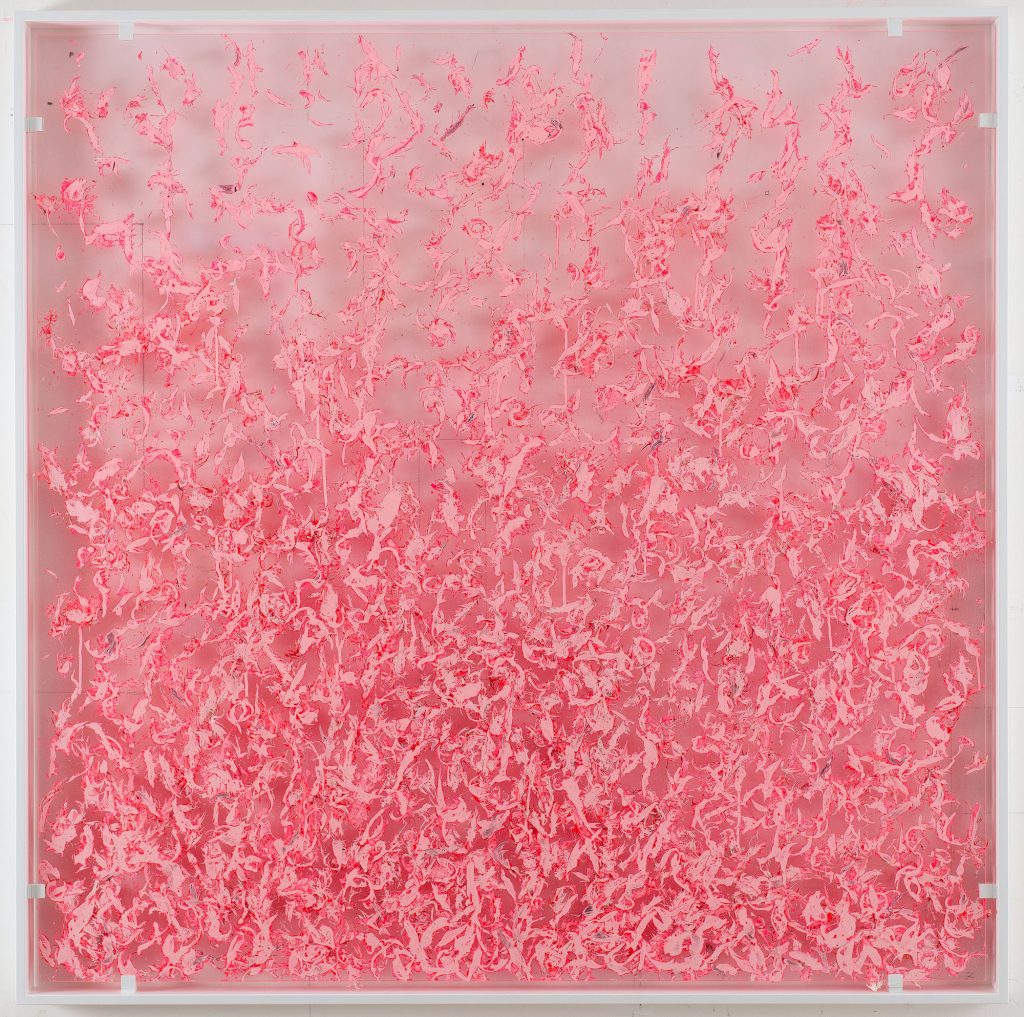 Alongside his interest in other subjects – architecture, masks, broken mirrors –, Alfredo Pirri is also fascinated by warm and cold colours he mixes himself, by their luminosity and shadows and their viscosity, mixing them for example with fat. He experiments with colour by introducing new friction and invites us to consider them as colour-landscapes that create a image that leads to contemplation and meditation.

Looking at the intense blue of Acque, your mind thinks of a deluge of rain, the kind of raindrops that leave a vertical trail on glass, or of a downpour in the darkness of the night that seems as if the whole firmament is dissolving and liquefying in some inky madness. With Arie, the artist plunges us into an ethereal, feathery pinkness. The feathers are individually dipped in resin then delicately placed on plexiglass before being painted by hand using a brush. This slow and meticulous process is in sharp contrast to the light and tenuous nature of the colour landscape. Etheric forces between heaven and earth, between gravity and levitation, can be perceived in the reflection of this pinky featheryness, in its light and shade. Both aerial and animal, this is the sublime paradox of Arie whose series (from 2013 to 2017) provides moments of imagery, photograms of an imaginary film that, according to Alfredo Pirri, tells the tale of an angel falling from heaven and crashing into the windows of our skyscrapers.

The landscape of colour is the desire of painting to extend into space by the process of reverberation. Verso N is an emblematic example of this: having painted the shiny surface of cardboard, Alfredo Pirri fashions it to look like the peaks and points of mountains with shape and texture in the piece. The succession and inclination of cardboard and plexiglass are worked with a light source to create a delicately blooming peachy-pink glow that suddenly makes the near distance pop. The colour-source, often concealed and out of reach in much of his work, becomes the artist’s focus of capture as he tries to make the elusive nature of reality more concrete. Our attention is drawn to the infra-thin, to that particular point where the boundary between the natural landscape and the landscape of the soul disappears.

These islands of peaks bathed in the sweetness of dawn represent the visible expression of an invisible principle. Such is Rudolph Steiner’s tribute, who said that « the peachy colour of the human incarnate is the living image of the soul » ; it echoes the power of N that is far from a void or nothingness, but a kind of morphing process, the endless potentiality of point zero. The colour-landscape of Alfredo Pirri ultimately reveals the power of figurability, the yearning that brings any painting to life.

Soko Phay is an historian and theorician of art, teaching in the plastic arts department of the University of Paris 8 and at EHESS.