A history of the gestures of perfumery, par Annick Le Guérer

Mosaics, paintings, perfume bottles, grooming tools and jewellery all evoke the gestures of a multi-millennial history of perfumery.

The walls of Egyptian temples show priests holding a gilded or bronze « arm-shaped incense burner » with a falcon’s head on one end and a small cup on the other end for fumigation purposes. This ancient activity nods to a primordial function of perfumery: to establish a line of communication between the earth and the heavens. Derived from the words « per fumum » (meaning, by means of smoke), perfume was originally offered to the Gods to establish a bond between them and mankind for protection and beneficence. The fragrant smoke wafting up towards the sky would not only appease their wrath but also delight their nostrils.

Papyri still show priests anointing statues of the deities with aromatic balms and sprinkling the deceased during mummification processes so that they would be transformed into « perfumed » gods and guaranteed eternal life via the application of perfumed compositions.

But these also have numerous secular uses. Bas-reliefs and paintings repeat the theme of servants rounding off their elegant mistresses’ ablutions with delicate perfumes over and over again. Banquet scenes from the Pharaonic era also show servants serving guests with scented cones of hippopotamus and crocodile fat on platters. When attached to their ceremonial wigs the cones would slowly melt and diffuse their aroma.

Greek vases, on the other hand, show many representations of athletes rubbing their bodies with fragrant oils. And in museum collections you can find perfume vases with broad flat rim disks for direct application of the contents to the skin and easy dispersal.

As the heirs of Greek culture, Imperial Romans would turn out to be great fans of perfume. There is a fresco on the wall in Pompeii that shows the various stages of perfume manufacture and fixes the image of this enduringly modern activity for posterity. A cherub holds a perfume bottle and applicator in front of the beautiful butterfly-winged maiden Psyche, the symbol of eternal love, who is sniffing a lightly scented wrist.

Other activities that were part of daily life in Rome included those of the « unctores » who would anoint bathers of both sexes leaving the Thermal Baths with myrtle, marjoram and laurel oils or a variety of ointments including quince melinum and saffron blossom crocinum. Ointment tubes with small bronze applicators have also been found.

During the Middle Ages a new ritual appeared involving perfume pomanders. They can be seen in lots of paintings of princes, aristocrats and upper bourgeoisie who are either holding pomanders in their hands or they can be seen dangling from a chain attached to their waists or necks. These small gold or silver balls, occasionally encrusted with precious gems and pearls, contained solid perfumes with added musk and amber, denoting the social status of their owners. But most of all, it was believed that holding these balls to the nostrils would protect the owners from putrid odours that spread diseases and epidemics.

Lighter scents such as Queen of Hungary Water were manufactured using a new technique – alcohol distillation – and they would contribute to the art of seduction as well as to health. In the XIVth century, this water made from rosemary blossom and distilled using wine, would, according to legend, have helped this elderly sick Queen to regain her youth, vitality and beauty and bag a marriage proposal from the King of Poland…This miraculous and revolutionary panacea, the success of which would not be challenged until the XVIIIth century, was not only applied to the skin but also drunk…Doctors thought that it was beneficial to swallow the scented liquid so that its life-saving qualities could work on the body from the inside out.

Another protective accessory visible in Renaissance art and which would be a roaring success in France when Catherine de Medicis came to the country to marry the future Henry II was the perfumed glove. Already in use in Italy, it combined utility with pleasure, scenting the hand and creating a barrier to the miasma dispersed by contaminated individuals. Court perfumer René le Florentin would do a roaring trade in perfumed gloves from his shop on Pont au Change. He was accused of having occasionally introduced poisonous substances by taking advantage of powerful animal scents in his perfume formulations, turning an innocent fashion item into a deadly trap, an activity that made him no stranger to a prison cell.

At the Court of Versailles, a hub from which fashions would radiate throughout Europe during the XVIIth and XVIIIth centuries, new practices came about involving the perfuming of fans, bonnets, sleeves, linen, clothes, wigs and even woodwork, adding to the aromatic atmosphere that was already filled with the smell of potpourri, incense burners and oiselets de Chypre. These little birds fashioned out of a chypre perfume paste comprising of rose petals, benzoin oil, oak moss and jasmine were placed in gold or silver cages where they gently burned, dispensing a heady, therapeutic fragrance.

Glove perfumers established a rich and powerful guild, gaining the right to work as powder makers. They contributed to the saturation of the air with fragrance by focusing the latter activity on perfuming wigs. Equipped with a huge silk powder puff, they would expel as much hyacinth, orange blossom, violet and tuberose blossom powder into the air as they could. Their customers, wearing long dressing gowns and covering their faces with a thick paper cone to avoid being blinded by the dust, positioned themselves to best receive the falling powder on their heads…Despite the slight risk of choking; this activity became indispensible to elegance.

The atomiser appeared as another new way to apply fragrance. It emerged at the beginning of the XIXth century with the trend for ringed containers from which tiny sprays of perfume could be squirted as desired. The system was subsequently perfected for the perfume bottles themselves. These days, diffusers featuring the latest technology continue to contribute to this ongoing renewal.

From its origins to today, whether solid or liquid in form, fumigated, burnt, applied on the skin, drunk or sprayed, perfume has continued to induce practices and actions that reflect the extraordinary richness of a cultural item that is a reflection of the skills, technology, preoccupations and values of every era. 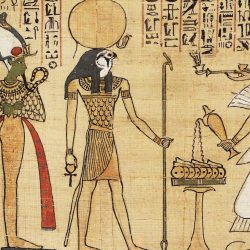 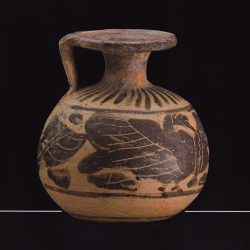 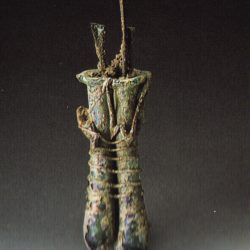 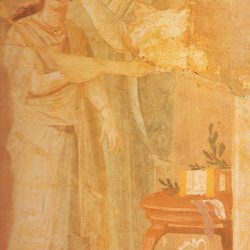 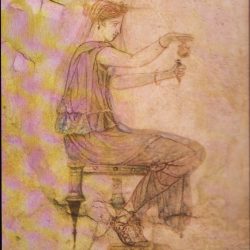 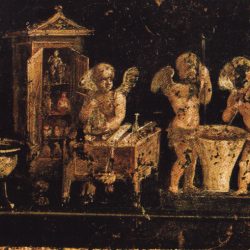 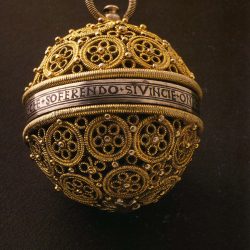 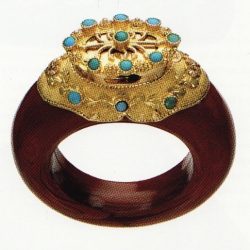 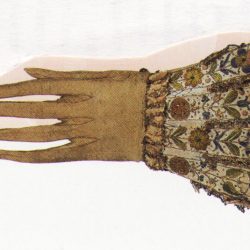 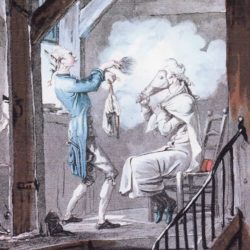 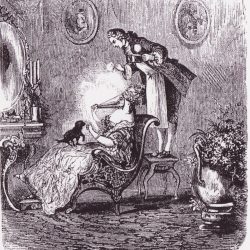 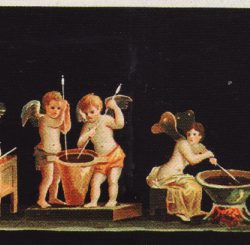